Skip to main content
Cancer
Cardiovascular disease
Diabetes mellitus
Immunisations and vaccinations
Injuries and falls
Life expectancy and mortality
Liver disease
Long term conditions
Mental and behavioural disorders
Neurological conditions
Oral health
Respiratory disease
Self harm and suicide
Why is it important?
Headline data
What the data tells us
Groups most at risk
What are we doing and why?
What would success look like?
Challenges

Self-harm is when somebody intentionally damages or injures their body. It is a way of coping with or expressing overwhelming emotional distress. Sometimes when people self-harm they intend to die but often the intention is more to punish themselves, express their distress or relieve unbearable tension. Self harm can also be a cry for help. Treatment for people who self-harm will usually involve seeing a therapist and could also involve taking antidepressant medication. Types of self harm can include cutting or burning of your skin, punching yourself, poisoning yourself with tablets, misusing alcohol or drugs, and deliberately starving yourself or binge eating. There are many, many ways to hurt yourself, including abusing drugs and alcohol or having an eating disorder. Sometimes, it's more important to focus on how someone is feeling rather than what they do to themselves. Quite often, people find that more helpful.

Levels of hospital stays for self-harm in Gateshead are significantly higher than the England average. In 2017/18 there were 495 emergency hospital admissions in Gateshead for intentional self harm [Chart - Hospital stays for self harm].[1] As a rate this was 245 per 100,000 people (Directly Standardised Rate - removing any differences due to age so that Gateshead is comparable with other areas), significantly higher than the England average of 186. 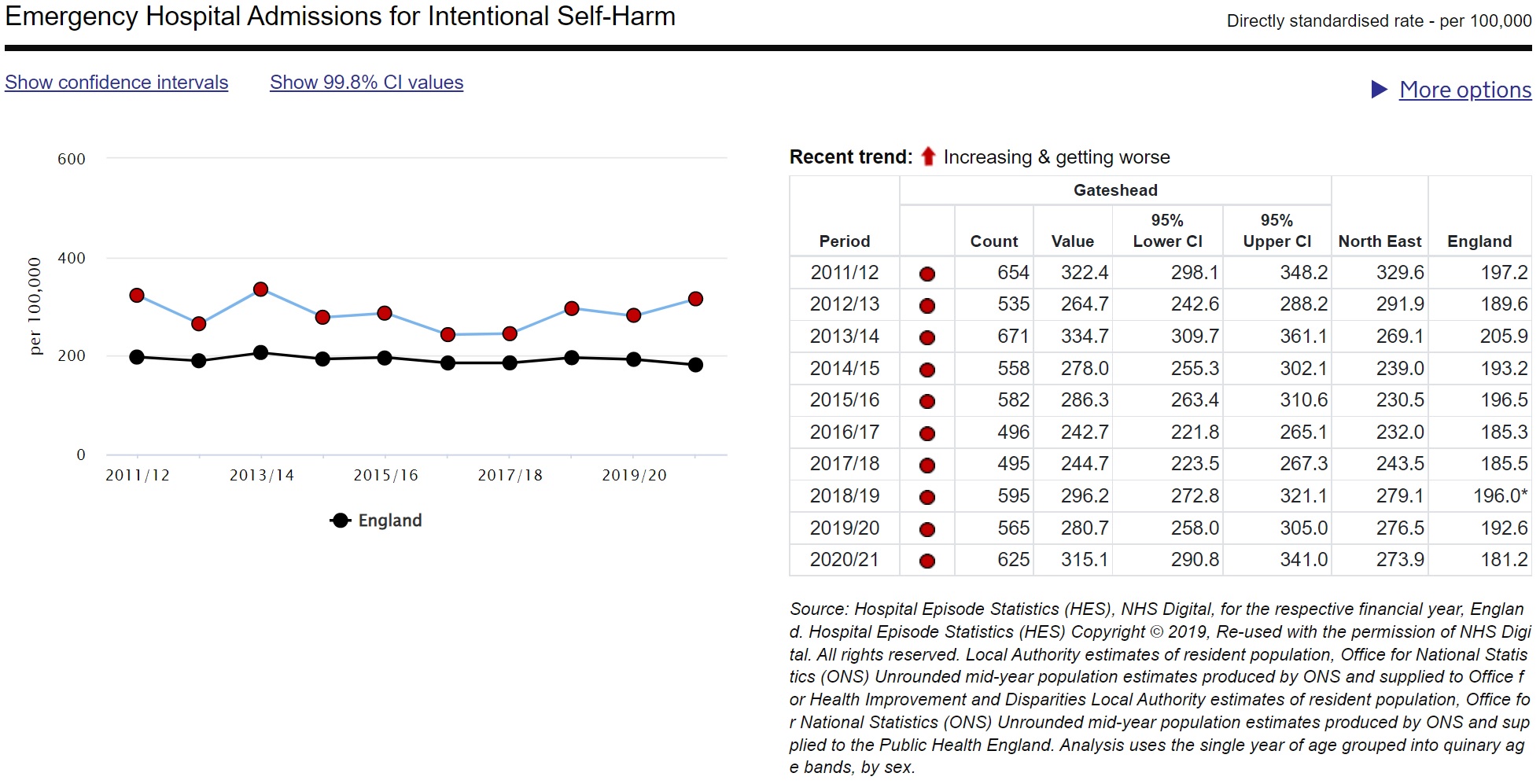 Data shows that in Gateshead those aged 35-64 are more likely to complete suicide than younger or older age groups [Chart - Suicide rate aged 35-64].[6]

51% of suicides were men who lived alone, compared with 38% of women living alone. 62% were either single, divorced or widowed.

33% had a relationship or family problem.

19% had an alcohol related problem recorded in the 12 months prior to their death.