Skip to main content
Cancer
Cardiovascular disease
Diabetes mellitus
Immunisations and vaccinations
Injuries and falls
Life expectancy and mortality
Liver disease
Long term conditions
Mental and behavioural disorders
Neurological conditions
Oral health
Respiratory disease
Why is it important?
Headline data
What the data tells us
Groups most at risk
What are we doing and why?
What would success look like?
Challenges
Self harm and suicide 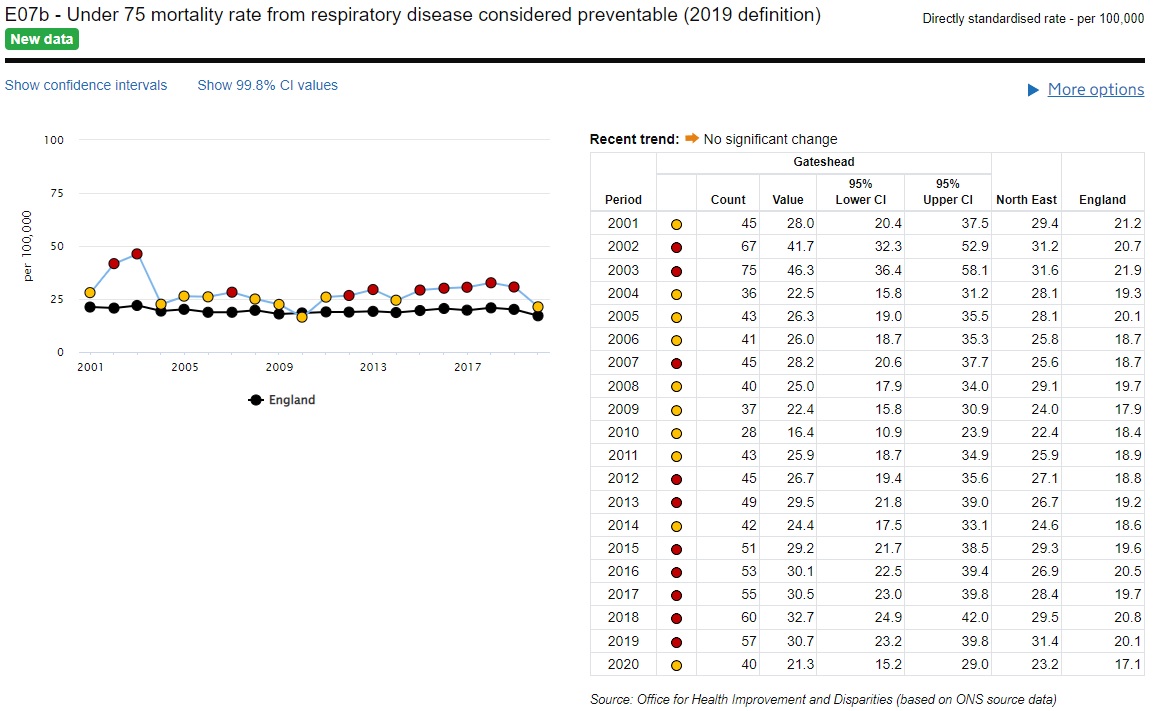 Chronic obstructive pulmonary disease accounts for more time off work than any other illness and is a major cause of hospital admissions, with 1 in 8 hospital admissions being due to a flare-up (exacerbation). The main cause is smoking.[3]

The prevalence of diagnosed COPD in Gateshead was 2.7% in 2013/14. In the most recent update of this data, it is now only made available at Newcastle and Gateshead CCG level, and was 2.4% in 2017/18; this has changed little over recent years and remains higher than in England (1.9%) [Chart - COPD prevalence][4] [See also: COPD prevalence by GP practice] It is estimated that 40% of (3,555) people with COPD in Gateshead are undiagnosed.[3] [5]

There is scope for further improvement in the quality of care of people with COPD in Gateshead that could improve quality of life and reduce unplanned hospital admissions.[5]

The rate of hospital admissions for exacerbated asthma has also been significantly higher in Gateshead (14.2 per 1000 on asthma registers) than in England overall (11.6 per 1000).[10]

According to Asthma UK, asthma is the most common long term condition in childhood, affecting 1 in 11 children. In NewcastleGateshead CCG area during 2017/18 there were 116 emergency hospital admissions of children and young people (aged under 19) because of asthma. This equates to 275 per 100,000 and is significantly worse than the England average of 186 [Chart - Hospital admissions for asthma (under 19 years)].[11]