Skip to main content
Cancer
Cardiovascular disease
Diabetes mellitus
Why is it important?
Headline data
What the data tells us
Groups most at risk
What are we doing and why?
What would success look like?
Challenges
Immunisations and vaccinations
Injuries and falls
Life expectancy and mortality
Liver disease
Long term conditions
Mental and behavioural disorders
Neurological conditions
Oral health
Respiratory disease
Self harm and suicide

Diabetes is a long term condition that is caused by a person's body being unable to control glucose (sugar) correctly. This results in the amount of glucose in the blood becoming too high. To control glucose levels, the body (more specifically the pancreas) produces the hormone insulin, but if not, enough insulin is produced, glucose levels can become too high. There are two main types of diabetes. Type 2 diabetes is the most common and occurs when the pancreas doesn't produce enough insulin and/or the body's cells don't react to insulin. Typically Type 2 diabetes is diagnosed in older people but can occur at any age. Type 1 diabetes is less common and usually develops before the age of 40, often in teenage years but can occur at any age. With Type 1 diabetes, the body does not produce any insulin at all.

Type 2 diabetes is a major cause of premature mortality, with around 22,000 people with diabetes dying early each year in England. It is often not Type 2 diabetes itself that causes death, but complications of the disease, including cardiovascular disease (CVD).

The condition is progressive, requiring action at the population and individual level to support changes in lifestyle, particularly diet and physical activity. It also requires oral drugs and insulin for most people over time. 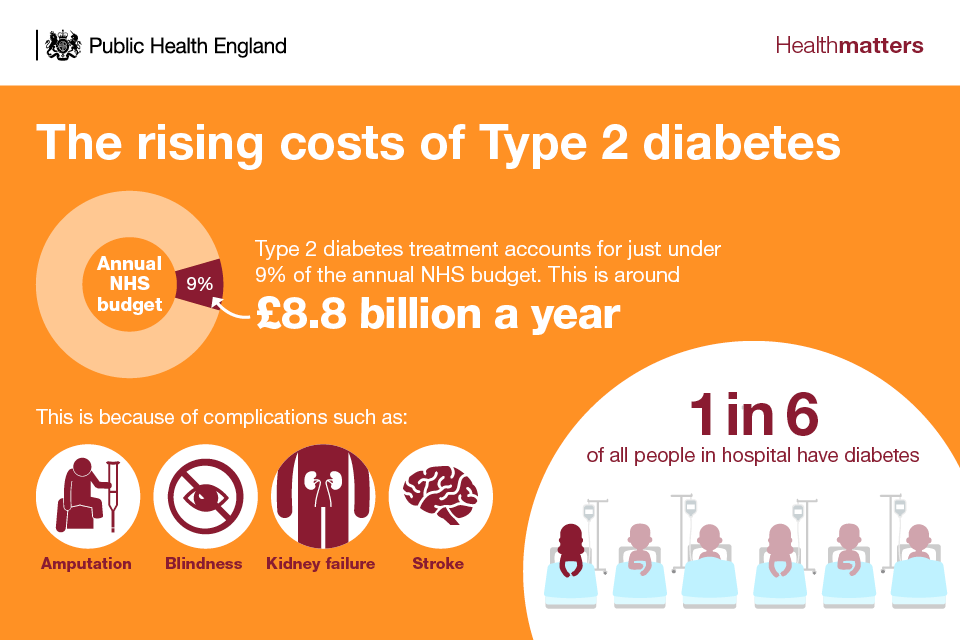 In 2017/18 7.0% of people registered with a GP in Gateshead were diagnosed with diabetes compared to the England average of 6.8% [Chart - Diabetes prevalence].[1] This means that 12,016 Gateshead people are known to have diabetes. The proportion of people with diabetes is gradually increasing. Since 2009/10 Gateshead has seen a year on year increase from 5.8% to its current level of 7.0%. [See also: Diabetes prevalence by GP practice] 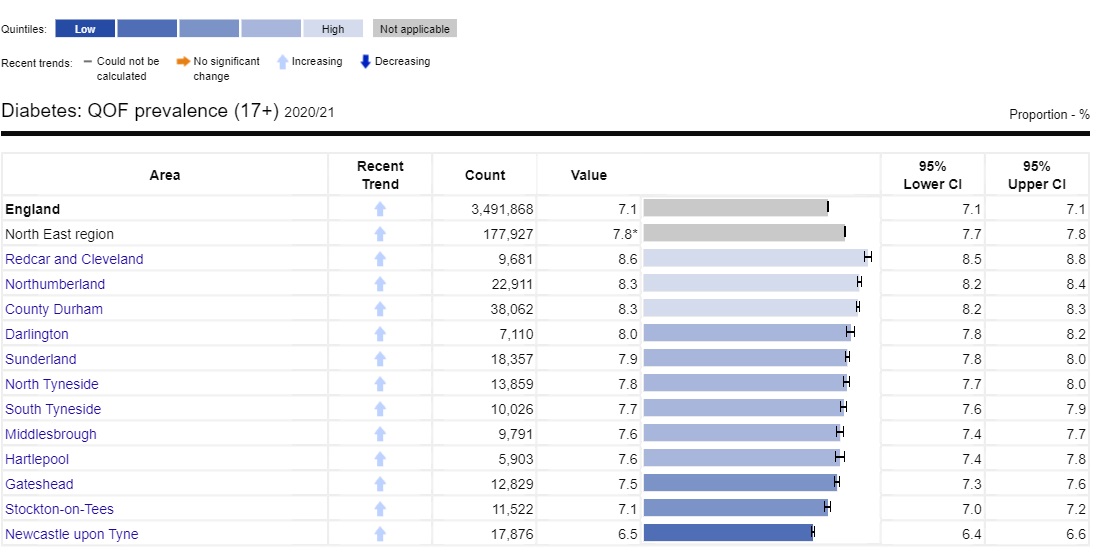 A model based on the prevalence of diabetes (both diagnosed and undiagnosed) captured in the Health Survey for England suggests that the prevalence of diabetes in 2012 may actually have been closer to 7.5% and anywhere up to 10.5% (upper confidence level)[2] - higher than the current 2013/14 figure of 6.5% diagnosed with diabetes. The model suggested that the prevalence could rise to 8.8% or anywhere up to 12.4% (upper confidence level) by 2030. There is obviously a degree of uncertainty to these synthetic estimates and projections, however it illustrates that many people may remain undiagnosed.

Causes of Type 2 diabetes include increasing levels of obesity, a lack of exercise, an increase in unhealthy diets and an ageing population. Symptoms include feeling very thirsty, passing urine more often than usual - particularly at night, feeling very tired and weight loss or loss of muscle bulk.

In terms of treatment, Newcastle Gateshead CCG is achieving good value for money as illustrated by the high outcomes being achieved (number of people with an HbA1c - glycated haemoglobin level - of 59mmol/mol or less) compared to relatively low total expenditure on diabetes prescribing.[4]