Skip to main content
Cancer
Cardiovascular disease
Why is it important?
Headline data
What the data tells us
Groups most at risk
What are we doing and why?
What would success look like?
Challenges
Diabetes mellitus
Immunisations and vaccinations
Injuries and falls
Life expectancy and mortality
Liver disease
Long term conditions
Mental and behavioural disorders
Neurological conditions
Oral health
Respiratory disease
Self harm and suicide

Cardiovascular disease encompasses all the diseases of the heart and circulation including coronary heart disease, angina, heart attack, congenital heart disease and stroke. 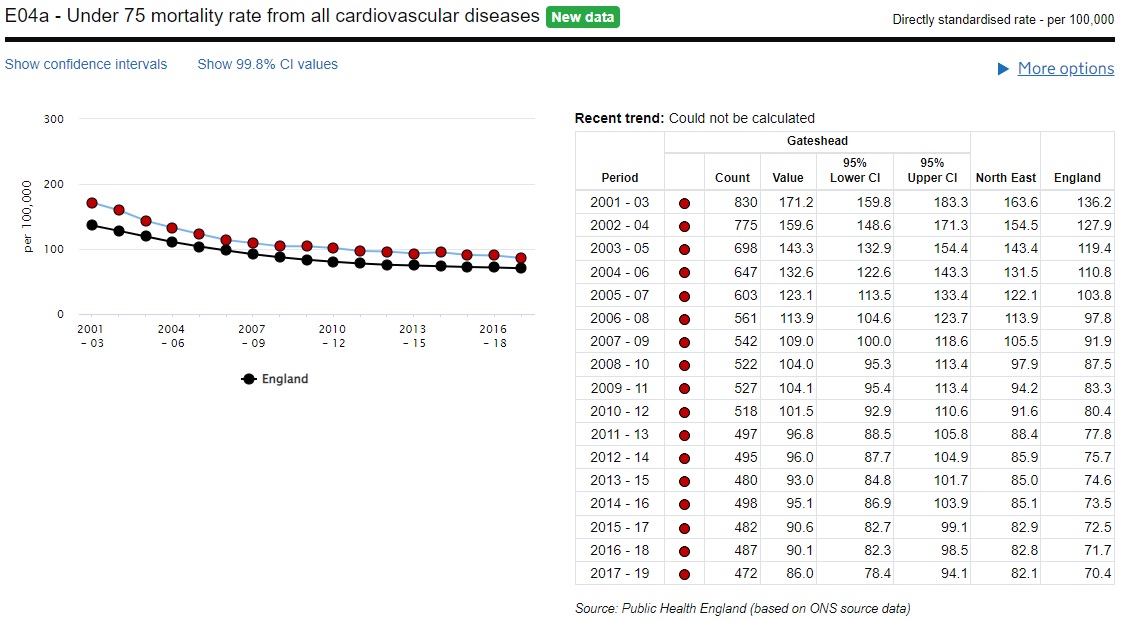 The number of deaths in under 75 year olds due to stroke is available at Newcastle and Gateshead CCG level. Between 2015-17 there were 185 deaths, a rate of 16.4 per 100,000 (DSR). This is significantly higher than the England average of 13.1. Following a long period of reduction, the trend appears to be levelling out in Newcastle and Gateshead CCG [Chart - U75 mortality from stroke].[9] Bridges ward has the highest ratio of deaths due to stroke compared to the number that would be expected (based on the England average) at 161, however this is not statistically significantly higher than the Gateshead ratio which is 118 to 100 that would be expected. [Map - Ward all mortality from stroke].[10]

For every 100 CHD emergency hospital admissions that would be expected (based on the England average), there are 108 in Gateshead. None of Gateshead's wards are statistically significantly higher than the average, but High Fell is indicatively the highest at 135 to 100 that would be expected [Map - Ward myocardial infarction (heart attack) emergency hospital admissions].[5]

Diabetes mellitus is another major risk factor for cardiovascular disease. The prevalence of diagnosed diabetes mellitus in the adult population of Gateshead is increasing, having been as low as 5.8% in 2009/10 but increasing to 7.0% in 2017/18 [Chart - Diabetes prevalence].[11]

The NHS Health Check programme is a locally coordinated programme of cardiovascular disease prevention in which people 40-74 years of age are invited for a cardiovascular disease risk assessment and given help to address identified risk factors. In 2013/14 - 2017/18, Gateshead was the top performing area in the North East, with 68.7% of eligible people receiving an NHS health check, significantly better than the North East average of 41.4% and the England average of 44.3% [Chart - NHS Health Checks].[12] This was achieved by focusing on reducing variation in uptake between GP practices, and using the Quality Premium to incentivise improvement in lower performing practices. (For more up to date quarterly health check statistics, Explore the NHS Health Check Data)