Skip to main content
Crime and Anti-Social Behaviour
Economy
Education
Environment
Housing
Why is it important?
Headline data
What the data tells us
Groups most at risk
What are we doing and why?
What would success look like?
Challenges
Poverty
Transport 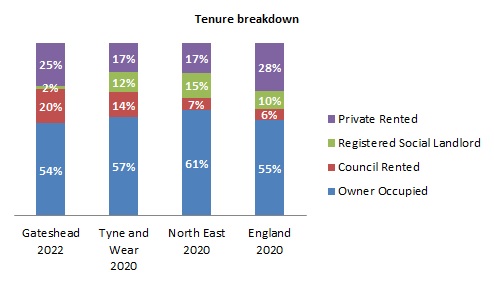 Owner occupation is lower in Gateshead than is recorded in the North East and England.[4] Conversely, renting from the Council is much higher in Gateshead.[5]

Whilst the condition of Gateshead's housing stock overall has been improving, it is estimated that 8% of the total stock is likely to fail the Housing Health & Rating System (HHSRS).[6] Private rented stock is most likely to fail (11%) followed by Owner occupied (10%) and then Social rented (7%). Whilst there are many hazards within homes, by far the most prevalent reasons for homes failing the HHSRS in Gateshead, are excess cold (threats to health from low indoor temperature); and presence of hazards likely to cause falls.

The private rented sector (PRS) has grown significantly over the last ten years and is playing an increasingly important role in meeting our housing demand and needs. In 2019 approximately 22,100 (23%) of the Borough's homes were in the private rented sector.[1] In Gateshead this sector grew by 70% between 2001 and 2011 (much higher than the national rate of growth), but this rate of growth has since slowed.[3] The main reasons for the significant increase in this sector were an increase in buy to let as investment and the decline in people's ability to afford to own their own home. The highest concentrations of private rented stock are in Saltwell and Bridges wards, with rates of approximately 34%[1]. Demand for private rented properties has been sustained in part due to the impact of the Government's austerity measures on earnings and incomes, and Government policy measures that continue to result in a reduction in the supply of social housing. Nevertheless, the proportion of households living in private rented accommodation in Gateshead is still lower than the England average.

Private rented stock is predominantly made up of older properties, which suffers disproportionately greater disrepair and poorer energy efficiency, and it can be poorly managed. The stock also houses some of the most vulnerable of the Borough's residents.

In 2019 approximately 25,500 (27%) of the Borough's homes were in the social rented sector.[1] This is made up of 19,300 Council owned properties and approximately 6,200 Housing Association/Registered Social Landlord properties. Whilst there has been some recent growth in the housing stock of private Registered Social Providers there continues to be a reduction in Council stock, primarily due to the continuation of Right-to-buy. Despite this reduction there is still a significantly higher proportion of social housing in Gateshead compared to the North East and England averages.

There is a significant level of under-occupation within our housing stock. It is estimated that 64,900 (73%) households in Gateshead are under-occupying properties; defined as having at least one more room than the statutory standards require.[9] Whilst this is a matter of choice and affordability, the release of under-occupied properties to the market from those downsizing can help to meet the overall need for homes for families.

Conversely, it is estimated that 6.2% of households are classified as overcrowded in terms of number of rooms in a home and 3.5% in terms of number of bedrooms relative to the household size and make-up. Both are lower than the estimated national average at 7.1% and 4.6% respectively.[9] Government guidance recommends Local Authorities to use the bedroom standard when assessing housing need.

Whilst new homes are becoming more energy efficient, significant impact has been due to over 40,000 existing homes in Gateshead receiving heating and insulation measures through national and Council funded energy efficiency improvement schemes carried out in recent years.

Energy Efficiency of our housing stock has a major impaction on wider environmental conditions. There has been a reduction in the percentage of Carbon Emissions produced from homes in Gateshead, down from 32% in 2005 to 30% in 2015, the per capita emissions have reduced from 2.6t (C02) in 2005 to 1.65t (CO2); meaning that Gateshead has already met its target of reducing carbon emissions by 20% by the year 2020.[10]

The energy efficiency of a home, together with its state of repair and type of construction can contribute to fuel poverty. A household is considered to be in fuel poverty if the home has higher than typical energy costs (for instance because of poor energy efficiency) and, were they to spend that amount on energy, they would be left with a residual income below the official poverty line. Households meeting both conditions are referred to as Low Income High Costs (LIHC). It is estimated that 1.9% of homes in Gateshead fail the Housing Health & Safety Rating System for reason of excess cold[6]. Whilst there are many factors impacting on the number of "excess winter deaths", fuel poverty/affordable warmth is a key element. (See also: 'Fuel Poverty/Excess Winter Deaths')

On the basis of projected population increase and changes in the household size in Gateshead, the Council's Local Plan [Core Strategy and Urban Core Plan for Gateshead and Newcastle] has identified the need to plan for approximately 11,000 new homes between 2010 and 2030.[8]

The 2017 Strategic Housing Market Assessment for Gateshead (SHMA) estimates that Gateshead's total population could grow by nearly 10,000 between 2015-30. Nearly 90% of the anticipated population growth in Gateshead is expected to be in the 65+ age group.[9]

The Local Plan set out the requirement for new housing development to provide a range and choice of housing, including the provision of Lifetime Homes and Wheelchair-Accessible homes.

There is a need for more family sized homes in Gateshead, together with a range of affordable and intermediate market housing, and greater choice to meet the needs of older people; including a mix of bungalow and high quality apartment provision.[8]

There is also a need to develop new specialist housing to meet the requirements of specific groups, including older people, people with disabilities, children requiring care, young people leaving care, and people with mental ill-health and multiple and complex needs. The Council continues to keep under review the need for specialist and supported accommodation, and the current assessment is summarised in its Market Position Statement 2019-2020.[11]

The choice and supply of accessible and adaptable homes, homes suitable for retirement living, and specialist and supported accommodation is key to supporting a healthy life and sustaining independence through people's life course.

The Council is working hard to drive and accelerate the pace of new housing delivery within the Borough to address gaps in our existing housing offer and meet housing need and demand, whilst ensuring its quality and sustainability. This has become increasingly difficult in the light of challenging market conditions, the higher costs of unlocking much of our brownfield housing land, and competition from other local authority areas able to offer a significant quantity of housing sites that are attractive to developers.

Over 2,800 new homes have been built in Gateshead so far (at the end of financial year 2018/19) during the plan period. Over 880 Affordable Homes have been delivered over the same period.

Gateshead has a relatively high supply of social housing, at social rent and affordable rent, and benefits from lower house prices than many areas. Itbenefits from a lower earnings to house price value ratio when compared with regional or national averages:[9] Nevertheless: