Skip to main content
Crime and Anti-Social Behaviour
Why is it important?
Headline data
What the data tells us
Groups most at risk
What are we doing and why?
What would success look like?
Challenges
Economy
Education
Environment
Housing
Poverty
Transport

Levels of recorded crime have remained relatively steady in the last three years, although lower levels of offences are recorded during February, April, November and December.[1] 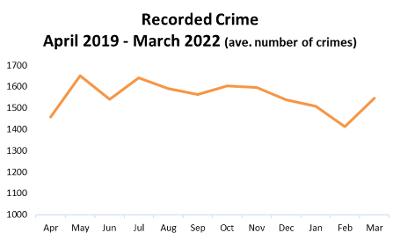 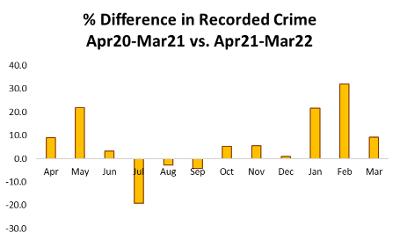 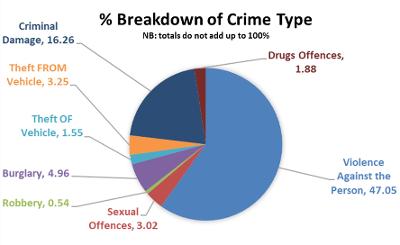 There were 455 drugs offences recorded during 2018/19, 89 more than in the previous 12 months. In addition, 5% of other crimes were recorded as being drug-related (as with alcohol, this is recorded at the discretion of the officer dealing with the crime).[1]

More than half of all victims of crime are female. This will differ depending on the type of crime reported, but the proportion of female victims has remained the same in the last two years.[1]

The peak age band (the age band with the most victims) is 30-34 years; 13% of all victims fit in this age band. This is similar to levels found in previous years. This is the peak age for both male and female victims.[1]

By indexing the data, we are able to determine whether victims in a particular age band are disproportionately affected by crime based on the total population in that age band. A figure over the Gateshead index average of 100 suggests that an age group has an over-representation as victims. In the last 12 months:[1]

The above scores suggest that those age bands are heading towards twice the number of victims than would be expected.[1]

Residents' perceptions are surveyed on a regular basis through the Safer Communities Survey. The latest results show that 95% of residents feel very or fairly safe living in their neighbourhood, and almost six in 10 people surveyed feel that the council and police deal with the anti-social behaviour and crime issues that matter in their area.[2]

Gateshead' Community Safety Board undertook an online survey during March and April 2019. The survey was completed by over 900 residents. As with the Safer Communities Survey, most people (80%) feel safe living in their neighbourhood, although (40%) say there are certain areas they would avoid. Only 3% of respondents feel that their neighbourhood has improved, 45% don't believe there has been any change and 52% feel it has got worse in the last 12 months.[3] 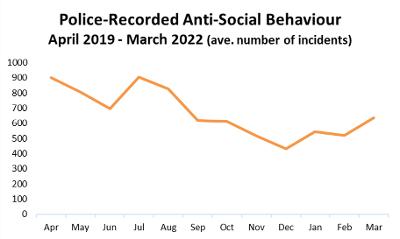 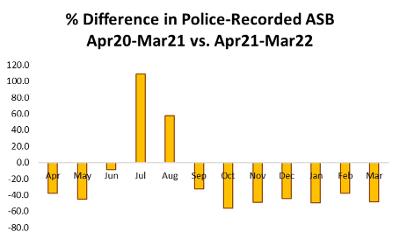 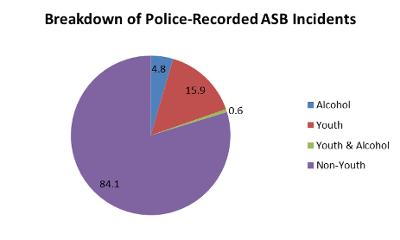 A breakdown of types of ASB show that the vast majority of incidents (76%) are classed as non-youth related. Anti-social behaviour linked to alcohol continues to fall and is a factor in only 6% of ASB incidents reported to police, reducing year-on-year. The proportion of incidents that are classed as hate-related has also fallen and accounts for less than 1% of ASB reported to police.[1]

Reports of noise and anti-social behaviour to the Council's Private Sector Housing team have increased by 46% in the last 12 months, with 1,131 complaints to the service.[4]

The summer months generate the most complaints; almost three in 10 complaints made in the last three years were between July and August. This figure is higher for the latest 12 month period when a third of all complaints were made in July and August. Most of the issues reported to the Private Sector Housing team appear to be about general noise issues, people banging about and making a noise in their property. A fifth of complaints relate to barking dogs.[4]

For reporting purposes, domestic abuse and hate crime are classed as ASB by The Gateshead Housing Company.

This is similar to the issues most commonly raised in the previous 12 months, although youth disorder featured in the top three in 2017/18 rather than animal nuisance.

Not reflected in the data is the number of complex cases investigated. There have been consistent increases in the number of cases that require more intensive investigation and support due to vulnerability and multiple complex underlying causes and/or challenging behaviours, both with perpetrators and victims of ASB. There are no figures currently available to demonstrate the numbers of complex cases investigated by The Gateshead Housing Company.