A needs assessment on offender and ex-offender health was carried out by the North East Offender Health Commissionning Unit in 2010. The following outlines some of the key points from the assessment.[1]

Only one third of offenders reside in prison or similar secure accommodation. The remainder is managed under supervision in the community. Supervision may be undertaken by the probation service or health and social care forensic services. Less is known about the health needs of offenders in the community compared to those in prison but the Needs Assessment by the NEOHCU combines this knowledge to provide a basis for more detailed local study of health need.

Sources of information relating to offenders include the police and the prison and probation services. On discharge, a large proportion of prisoners report that they have no fixed abode. However, the most reliable source of information about area of residence of offenders in the community is the probation service. Evidence shows a concentration of offenders resident in the most disadvantaged neighbourhoods within a locality. Neighbourhoods where offenders are concentrated are associated with other factors such as high turnover of tenancy and rent arrears.

The following information relates to the former Northumbria Probation Trust and is based on offenders who were sentenced between 1 June 2013 and 31 May 2014.[2]

In the 12 months to 31st May 2014, 620 offenders were subject to an OASys assessment. Of those individuals, almost nine in 10 are male (87%). The age breakdown shows that the highest proportion of offenders falls within the 26yrs - 49yrs age group; two thirds of offenders are in this age group, while a fifth of individuals in the 50yrs - 64yrs age group are female.

Offence category - Violence (23%), theft and handling (19%) and burglary offences (12%) continue to dominate the main offence statistics.  Breaking the data down by gender shows a clear difference in the offending behaviour of males and females.  Three in 10 females are linked to theft and handling offences, while violent offences are more common among male offenders (24%).

Criminogenic need - The Offender Assessment System (OASys) identifies the key criminogenic risk factors that influence offending behaviour in Gateshead. The assessment identifies if offending is related to the offenders' lifestyle, relationship with their partner or family members, unsuitable accommodation/living arrangements, behavioural characteristics as well as substance misuse (such as alcohol/drug factors).

The top four criminogenic needs of the Probation clients managed in Gateshead between June 2013 and May 2014 are:

Actions to address criminogenic need become part of an individual offender's sentence plan; activities and objectives are put in place and closely monitored by the officer responsible for managing the offender in the community. Thinking and behaviour is the highest criminogenic factor influencing the offending behaviour of adults under probation supervision in Gateshead.

In a third of assessments undertaken the offender is less well educated and trained than other groups in society and is therefore more likely to be unemployed, have a poor employment history and/or express a dislike to work. This is likely to have an impact across all crime types but more so on acquisitive-related crime categories in particular.

Criminogenic need by crime type - The table below shows the proportion of offenders under probation supervision that were classified as having a specific criminogenic need broken down by crime type (e.g. 31% of offenders with criminal damage recorded as a main offence were assessed to have financial needs; while 70% of those committing violent-related offences had lifestyle issues). 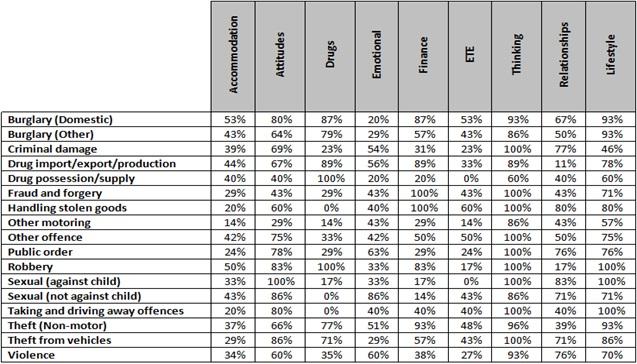