Skip to main content
Autism
Why is it important?
Headline data
What the data tells us
Groups most at risk
What are we doing and why?
What would success look like?
Challenges
Carers
Domestic abuse victims
End of life care
Ex-armed forces personnel and their dependents
Homeless
Learning disabilities
Migrants
Offenders
Physical disabilities
Refugees and asylum seekers
Sensory disabilities
Travellers
Vulnerable children and young people
Vulnerable older people

Autism is a lifelong developmental disability that affects how a person communicates with, and relates to, other people. It also affects how they make sense of the world around them.

It is a spectrum condition, which means that, while all people with autism share certain difficulties, their condition will affect them in different ways. Some people with autism are able to live relatively independent lives but others may have accompanying learning disabilities and need a lifetime of specialist support. People with autism may also experience over or under sensitivity to sounds, touch, tastes, smells, light or colours. 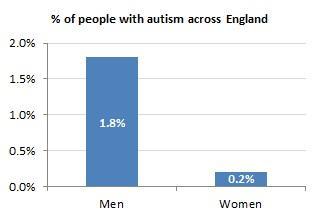 1.0% of the adult population in England was found to have an autistic spectrum disorder, according to a survey from 2007.[1] However, autism was found to be more prevalent in men at 1.8% compared to women at 0.2%.

The above prevalence rates have been applied to more recent population projections to estimate the current and future prevalence of autism. In Gateshead, an estimated 1,241 adults aged between 18 and 64 are believed to have an autistic spectrum disorder, as well as a further 371 aged 65 and over.[2] Whilst the number aged between 18 and 64 with autism is expected to reduce by about 30 people or 2% by 2035, the number over 65 is expected to increase by 102 or 22% by 2035. This is perhaps linked to the ageing population, with more people living longer. 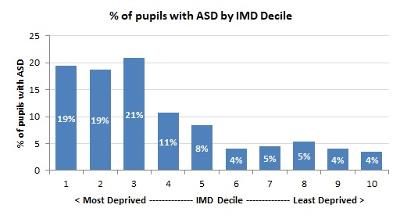 The National Autistic Society states that 'estimates of the proportion of people with autism spectrum disorders who have a learning disability (IQ less than 70), vary considerably, and it is not possible to give an accurate figure. Some very able people with autism may never come to the attention of services as having special needs, because they have learned strategies to overcome any difficulties with communication and social interaction and found fulfilling employment that suits their particular talents. Other people with autism may be able intellectually, but have need of support from services, because the degree of impairment they have of social interaction hampers their chances of employment and achieving independence.[2]

Standard mortality rates for people with autistic spectrum disorder are twice as high as for the general population.[4] Those with both epilepsy and autism have an 800% higher rate of mortality than those with autism alone. In Gateshead, this rate would calculate to over 100 school aged children with both autism and epilepsy.[5]

[2] People predicted to have autistic spectrum disorders, PANSI and POPPI, 2014 based population projections for 2019 estimate (PANSI and POPPI websites)