Skip to main content
Child poverty
Why is it important?
Headline data
What the data tells us
Groups most at risk
What are we doing and why?
What would success look like?
Challenges
Fuel poverty
Welfare reform and austerity

The most recent validated data on local levels of child poverty available is from 2016, when there were 8,180 or 20.5% of children in Gateshead in poverty (compared to 19.4% in 2015); the England average is 17.0% and the North East average is 22.2%. Prior to 2014 child poverty had consistently reduced in Gateshead almost ever year from a high of 24.8% in 2007. However, 2014 saw an increase and the 2015 and 2016 rates have fluctuated. The Public Health Outcomes Framework tool provides a useful graphical display of the data, although it is updated less frequently [Chart - Child poverty]. The increase in child poverty this year does not necessarily imply that the income of families has decreased, rather the '60% of median' income threshold that is used to determine child poverty can vary from year to year.[1] Loughborough University has combined the 2015 version of the above child poverty measure with indicators from 2017/18 including benefit claimants and unemployment, as well as 2011 Census occupational structure to look at child poverty after housing costs. The resulting measure estimated that at that time there may have been as many as 36.2% of children in poverty after housing costs are taken into consideration.[3]

The official national measure of child poverty shows that nationally two thirds of children in low income households live in households where at least one person is in employment (before housing costs).[2] This is thought to be linked to low wage levels, zero-hours contracts, part-time work, and other flexible labour market initiatives.

The Income Deprivation Affecting Children Index (IDACI) ranks Gateshead as 68th out of 317 local authorities in England (where 1 is the highest level of deprivation).[4] 31% (10,767) of dependent children aged 0-15 live within one of the 20% most deprived areas in England in terms of IDACI. [Interactive Map - IDACI 2019]

In addition to unemployment and low income, national research suggests that families are at greater risk of child poverty if they are a lone parent household, headed by someone from an ethnic minority (particularly from Pakistani or Bangladeshi origin), contain one or more disabled member, or are a larger family (i.e. 4+ children).

The wards that have a high proportion of children in poverty are clustered in or around the central area of Gateshead and include Felling (40.4%), High Fell (33.8%) and Deckham (33.1%). Small pockets of significant child poverty are evident in Old Fold, North Felling, Beacon Lough East, Springwell Estate and Sheriff Hill, where more than 4 in 10 children live in families below the poverty line.[1] 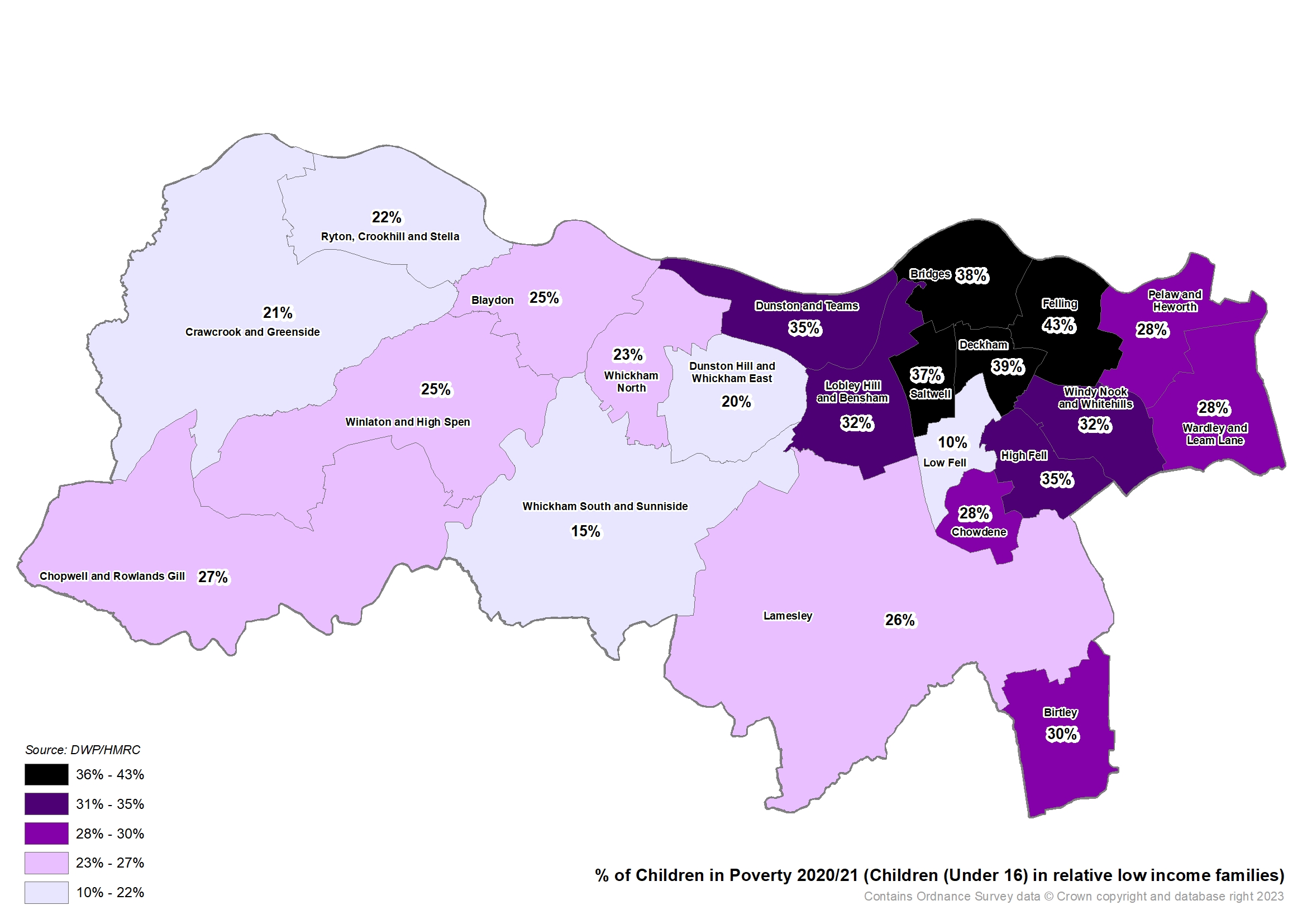