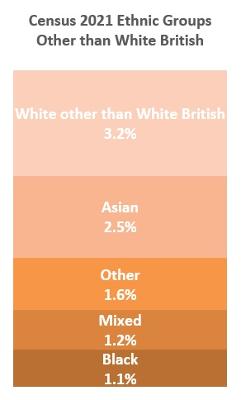 It is estimated that around 3.7% (7,500) of the population are from a black or minority ethnic (BME) group.[1] The BME population has increased from around 1.6% in 2001. This does not include Gateshead's orthodox Jewish community; over 3000 people state that their religion is Jewish, although this also includes the non-orthodox Jewish population. Over 400 were aged 0-4 and around 1,200 aged 5-17.

Gateshead's increasing diversity may have implications in terms of support for different communities. For example, there have been significant increases in residents of Chinese (+690) and African (+695) origin, and 2% of households do not contain anyone who considers English to be their main language.[1]